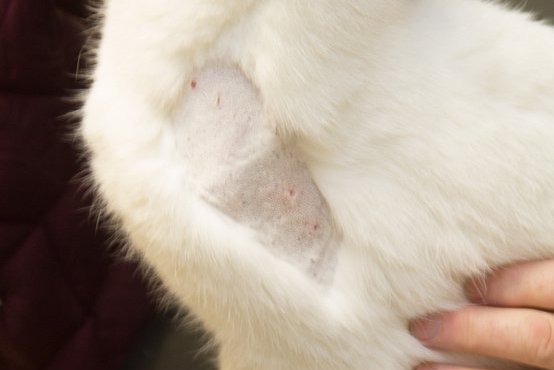 Alfie was originally rescued as a kitten: he had been found amongst the waste plastic and bottles at a local recycling centre. He has grown into a large, friendly cat, sharing the Gordon family home with a twelve year old cat called Casper. The two cats don’t get on well, but they tolerate one another’s company, giving each other the cold shoulder and ignoring each other rather than fighting or being aggressive in any way.

Alfie loves his food. Last week, Brendan was standing at the kitchen counter, close to where the cat food is stored. Alfie quietly sidled up to him, and began circling him, purring, as cats do when they want something. Brendan didn’t notice him until it was too late: he stepped sideways and accidentally stood on Alfie’s left forefoot. Alfie let out a loud yowl and bolted out of the room. Brendan went after him, worried that he might have damaged the unfortunate cat, but when he found him hiding under a chair in another room, he seemed none the worse for wear. He was grooming himself, and when he walked across the room, he seemed to be using the leg normally.

It wasn’t until a couple of days later that Brendan thought that perhaps that his foot had been damaged after all. He saw Alfie walking along the top of the wall in the back garden, and he was dipping down whenever he tried to put weight on his left leg. He was obviously very lame.

Brendan brought him to see me, explaining the background to the lameness. When I examined Alfie, I expected that his foot would be painful to touch. I was surprised to find that his foot did not seem particularly painful, and when I examined it carefully, there was no visible damage or swelling. Yet Alfie was definitely not putting weight on his leg properly.

I decided that it seemed likely that the foot had been crushed, causing bruising and spraining, and that Alfie was one of those tough cats who refused to react when the vet was handling him. I gave him a few days of pain relief, and I suggested that Brendan should keep him indoors, so that Alfie would be forced to rest. As with humans, many minor injuries heal rapidly with the combination of pain relief and rest.

A few days passed, and although Alfie was still in good form, wanting to go out and about in the garden as normal, his lameness didn’t seem to be getting any better. I’d explained that if he didn’t improve, we’d need to carry out a more detailed investigation, so Brendan brought him back to see me.

As soon as I saw Alfie limp out of his cage, I knew that there was something going on that needed extra treatment, but the cause of the lameness was puzzling. A detailed investigation was necessary.

It can be difficult to examine a lively cat in detail, and Alfie was wriggling and struggling as I tried to closely check every part of his sore leg. I suggested that it would be best to take him in to our clinic for the day, and I gave him a sedative to make it easier for both of us. For Alfie, the state of sleepiness brought on by the sedation meant that he was no longer anxious about being at the vet. For me, it meant that the wriggly cat was now a drowsy, easy-to-handle patient, allowing me to inspect his leg in more detail.

Again, even with careful, close examination, I could find no pain or damage in Alfie’s foot. While he was sedated, I took the opportunity to take some x-ray pictures of his leg, in case he had something bizarre like a cracked or partially fractured bone. Everything came back as normal. So why on earth was this cat not using his leg properly?

Before allowing him to wake up from the sedation, I went back to basics, and examined his leg ultra-carefully, starting from the tips of his toes, and working all the way up to his neck. I flexed and extended every joint, and I gently massaged every area, feeling for any stiffness or irregularity, searching for anything that might give a clue to help me find the reason for his lameness.

It was when I reached his shoulder area that I noticed something odd. Even under sedation, he stirred slightly when I prodded the muscles in this region. I had a hunch, and using electric clippers, I shaved the dense fur away so that I could directly examine the surface of the skin.

As soon as I’d done this, I knew that I’d solved the puzzle. There were two sets of double pinpoint puncture marks on his skin, like the “twos” on the side of a set of dice. There was only one thing that could cause this type of injury: bites from another cat.

Cat bites are a common cause of lameness in cats, and because the skin is covered in fur, the bite marks can be difficult to spot. Alfie must have been fighting with a cat in the back garden, and he’d suffered at least two nasty bites to his left shoulder. Cats’ teeth carry disease-causing bacteria, so when a cat is bitten, there are two causes of pain. First, there’s the immediate bruising and pressure injury caused by the physical bite. And second, there’s a build up of infection under the skin, causing pain that increases over successive days. My initial treatment of pain relief would have helped Alfie with the initial pain of the bite, but I now knew that he needed antibiotics to cure his problem fully.

I gave him an injection of antibiotics that lasts two weeks, so that Brendan doesn’t need to give him tablets every day.

Alfie began to improve at once, and a week after his second visit, he was running along garden walls as nimbly as ever. There’s been no sign of the visiting cat who inflicted the injury on Alfie, and everyone is hoping that he’ll never come back. One fighting injury is more than enough for a peace loving cat like Alfie.