Chip developed a strange rash on her face 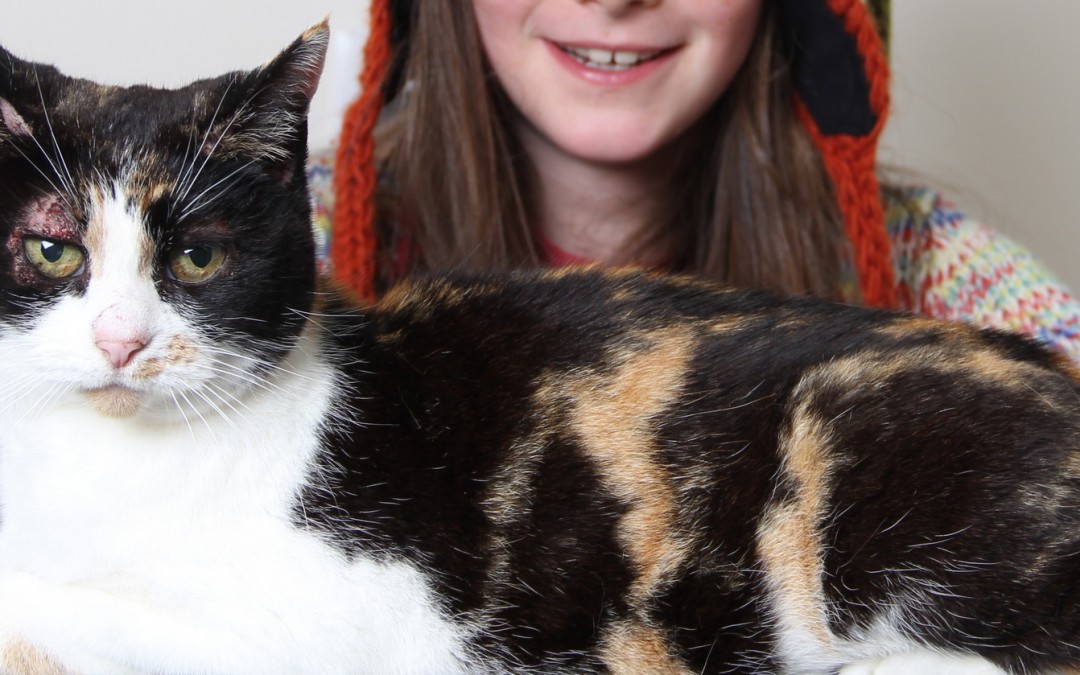 Aoife has never known life without Chip. Six years before she was born, her parents adopted the young adult cat from the DSPCA. When Aoife was a baby, Chip used to sit nearby purring, and as she’s grown up, the friendly cat has always been her comfortable companion. Chip is now elderly, but she seems as fit and healthy as ever.

A week ago, Aoife noticed that Chip looked different.  The fur was thinner around and above her eyes, and there were a few red bumps on her skin.  At first the family thought that she might have been stung by insects, or perhaps she’d walked through some nettles: maybe she’d recover after a few days. In fact, the condition deteriorated, with large bald areas appearing, and an acne-like scabby rash around both eyes. She didn’t seem to be upset by it at all: she wasn’t scratching herself or rubbing her head on anything, but it was obvious that there was something amiss, so they brought her to  see me.

The diagnosis was obvious as soon as I saw Chip: the skin condition is called “miliary dermatitis”. The word “miliary” comes from “millet seeds”, because affected skin feels bumpy, as if someone has scattered millet seeds onto it. The second word – “dermatitis” – just means “inflammation of the skin”.

Miliary dermatitis is common in cats, especially in the summer. The most common cause is an allergic reaction to something in the environment: cats’ skin tends to react to allergies by becoming reddened and scabby. There are many possible causes of this allergic type of reaction, including pollens, dusts and parasites like harvest mites (which are common in August). I asked Aoife a few questions about Chip’s daily habits: did she go out in fields? Did she have much contact with other animals?

As I asked the questions, I continued to examine Chip. Another common cause of miliary dermatitis is fleas, but the family hadn’t noticed any fleas on her, and she hadn’t been itching herself, so they didn’t seem likely. However, with the long, warm summer that we’ve had, fleas have been unusually common, so I spent some time carrying out a detailed check through her fur for any creeping, hopping insects. I ran a fine, metal toothed comb through her coat, along her back and then along her underside, looking for evidence of fleas.

I was about to give up, running the comb through her fur one last time, when I found what I was looking for: the comb picked up an active, wriggling flea. I put it on the table, showed it to Aoife, then apologised to the flea before squashing it. (I don’t like killing anything, even fleas, but the welfare of bigger animals has to come before parasites).

There was no doubt about it: Chip’s rash had been caused by fleas, and the family had to carry out a thorough flea-elimination plan at home. I treated Chip by applying a spot-on anti-flea drop which would kill all the fleas on her with in 24 hours. I also gave her a tapeworm treatment: cats pick up worms by swallowing fleas as they groom themselves.

I also explained that there were certain to be fleas in Chip’s bedding and around the home, and I sent Aoife home with a special household spray to eradicate them and to prevent any flea eggs from hatching into new adult fleas.

Finally, I gave Chip an anti-inflammatory injection to settle down the red, sore-looking rash.

Chip purred as I put her back into her carrier: she’s such a talkative, friendly cat that you’d swear she was saying “Thanks very much for sorting that one out”.