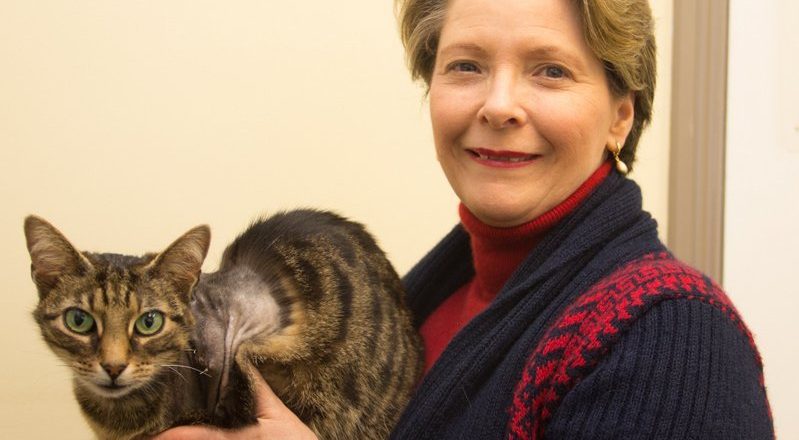 Fiona took Kermit on as a rescued kitten from our vet clinic, and he’s been healthy for most of his life. He’s an assertive individual, and he had always been involved in occasional fights with other cats in the neighbourhood. So in April 2016, when he developed a swelling on the right side of his face, Fiona presumed that this was likely to be due another cat bite. When she brought him to our clinic, I confirmed that yes, this was an abscess, and the usual treatment of antibiotics and regular wound cleaning would sort it out. However when I was examining him, I noticed something that Fiona hadn’t been aware of: there was a hard area under his skin on the left side of his neck, the size of a matchbox. It wasn’t bothering Kermit at all, but it was definitely not normal. I suggested that the safest option would be to take a biopsy of the hard area, to find out exactly what it was.

The biopsy result brought bad news: the laboratory report explained that this was a soft tissue sarcoma, which is a malignant form of cancer.  It doesn’t usually spread to elsewhere in the body, but instead, it tends to keep recurring at the place where it originally started.
I took immediate action, carrying out surgery to remove the entire area of abnormal tissue, as well as a 3cm margin of healthy tissue all around it. This type of “wide excision” is the best way to tackle these cancers, but in a small animal like a cat, there’s a risk of seriously injuring a patient if too much tissue is removed. Vital structures, such as nerves and major blood vessels have to be preserved.  There’s often a compromise between carrying out radical surgery and keeping the animal healthy and comfortable.
I was happy that the surgery had been as comprehensive as possible, and over time, Kermit’s wound healed, and the fur grew back in. Kermit continued to come in for regular rechecks, allowing us to feel the area carefully every three months, looking out for early signs of the cancer recurring. We knew that there was a 50% chance of recurrence, and if this happened, he’d need further treatment.

Eight months after his initial surgery, a tiny, frozen-pea sized lump could be felt in the area of his surgery. This was bad news: the cancer had come back.
The first approach was to repeat the surgery, again removing a wide area of healthy tissue around the tiny lump. Again, he healed well, and we hoped that the cancer had finally been eradicated, but the regular rechecks continued: the best hope of curing cancer is generally to surgically remove any abnormal tissue at the earliest possible stage.
This time, ten months passed, and Kermit was doing well. Then it happened again: a tiny hard lump appeared at the original site of the cancer. Once again, radical surgery was carried out, but at this stage, we decided to take his treatment to the next stage. We set up a referral appointment with a vet who specialises in cancer treatment, based in Cork. The aim was to try to utilise extra measures to try to reduce the risk of his cancer coming back a third time.

A special type of chemotherapy was prescribed for Kermit, with a regular intravenous infusion of a human-style anti-cancer drug every three weeks. A raft of monitoring measures were also started, including x-rays and blood tests, to minimise the risk of adverse reactions to the chemotherapy. Kermit has reacted well to the treatment: in the veterinary world, it isn’t considered fair to use chemotherapy regimes that cause serious side effects to our patients. For animals, there’s a general sense that quality of life is far more important than quantity. Fiona hasn’t noticed that Kermit seems unwell in the days after his chemotherapy: his cat life continues much as normal.
Unfortunately, even with the best anti-cancer treatment, a cure can be difficult to achieve. Earlier this month, yet another small hard lump appeared at Kermit’s operation site. It was tiny – no bigger than a match head – but it was definitely the same cancer, back again. Poor Kermit had to have yet another operation – his fourth one. As before, he has coped well with the surgery, and he’s continuing to have his regular chemotherapy sessions.
Fiona doesn’t want to give up: Kermit is a contented little cat, and he has coped very well with the complex treatments that he has had. When he’s at home, he’s in good form, enjoying life as much as ever. He doesn’t know that he is sick, and as far as he is concerned, life is good.
Fiona made the wise decision to take out pet insurance for Kermit when he was young: this means that the insurance company is covering nearly all of the costs of his cancer treatment. In theory, even more complex treatment would be possible, such as travelling with him to the UK for radiation treatment (this is not yet available for cats in Ireland). There are limits on what Fiona feels is fair for him, and she feels the stress of travel overseas could be too much.
Kermit has become a popular patient at our clinic: our vets, nurses and receptionists know him well. We are all hoping that  this latest surgery will be his final one and that, at last, with the extra help of the chemotherapy, his cancer may finally have been cured.