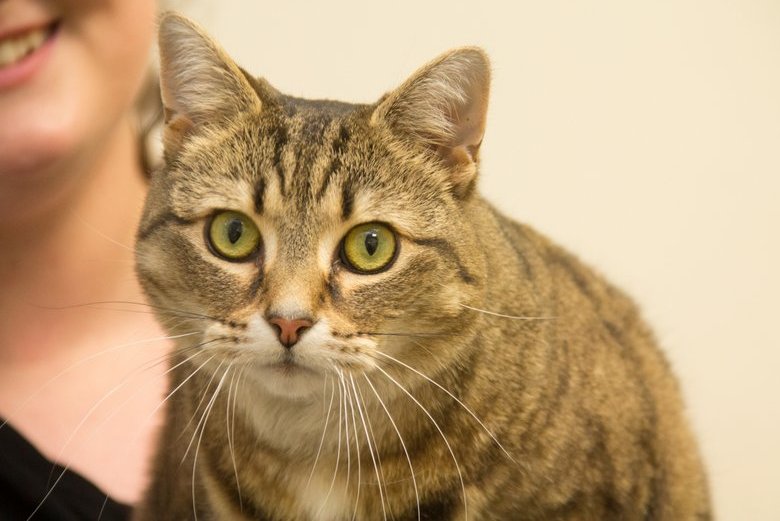 Kittens and cats often come into people’s lives in unusual ways, but the arrival of Miracle into Christina’s life was exceptionally bizarre.

It happened on a Thursday afternoon in the summer of 2013, when Christine was busy at her office desk in Bray. She heard a faint noise coming from the wall by her desk. She stopped and listened carefully, but there was nothing more. She thought at first that there might be a bird’s nest in the cavity behind the wall. It was an old building, and she knew that birds sometimes flew in and out of holes in the eaves. It was the bird nest season, so this seemed like the most likely explanation.

Christina went home that night without thinking much more about it, but when she returned to the office early the following morning, she heard more than just a bird-like rustle: this time she heard a distinct high pitched miaow. There was no doubt about it: there was a kitten in there.

She tried to pinpoint where the noise was coming from, but it wasn’t easy. Someone had a standard claw hammer in the office, and they knocked a few fist sized holes in the plasterboard, trying to get closer to the precise location of the miaow. It wasn’t easy, however, and by the afternoon, the miaows could still be heard, but they hadn’t managed to pinpoint the location of the creature who was making the sounds.

Christina decided that a more radical approach was needed: she phoned her father, and asked him to come up to the office with his Kango demolition hammer. Within a few minutes, he had knocked a huge hole into the wall, over a meter in diameter. He was then able to put his head into the hole, and have a good look around. The source of the miaowing could now be easily seen: a tiny female kitten was lying on the ground in the cavity space between the plasterboard and the cement blocks that made up the wall. She was only around a week old; her eyes were not even open yet.

How had she got there? Christina had noticed that there was a colony of stray feral cats in the garden behind the office. A pregnant mother cat must have somehow sneaked into the attic roof space to have her kittens. The tiny kitten must have wriggled away from the rest of her litter mates then accidentally fallen down the edge of the attic floored area, into the crevasse between the plasterboard and the blockwork. If Christina hadn’t rescued her, there is no doubt that she would have died of hunger within a few hours.

Christina brought the kitten to my clinic to be checked over; she was surprisingly healthy, but she was much to young to be away from her mother. She had to be hand reared; Christina had to feed her with a bottle, and some special infant formula designed for kittens. It was a full time job, with the tiny kitten even needing fed during the night. After a couple of weeks, she started eating solid food (softened with warm water to make it easier to eat). And by the time she was two months old, she was as healthy and strong as any kitten. Christina named her Miracle because that’s exactly what she was: she was an exceptionally lucky kitten to be saved from such as traumatic start in life.

Miracle has since grown up as a strong and healthy adult cat. Christina has cherished her, making sure that she has been fully vaccinated, treated for parasites, spayed and microchipped. She’s a friendly, good-natured cat, but she does sometimes show signs that her parents were feral cats: she gets nervous with strangers, and prefers to be with people that she knows well.

Recently, she developed a strange type of behaviour that worried Christina: he skin started twitching in different places, and her body did a weird ripple from time to time, almost as if she was having tiny electric shocks. And when Christina went to reassure her by petting her, she jumped away, as if she wanted to be left alone. Christina brought her to see me, worried that she might have some strange neurological condition.

When I examined Miracle, the first thing I did was to check her skin very carefully. She has a dense, glossy coat, and on first impression, it seemed very healthy. However, as I parted the hairs and looked at the skin itself, I found some dark brown specks, almost like pieces of coarsely ground black pepper. I picked a few of these specks out of her coat, and placed them onto a piece of moist cotton wool. I then showed Christina what was happening to them: a reddish brown smudge appeared around each speck, like a hazy halo. This confirmed what I suspected: the specks were particles of dried blood that had been left behind by fleas that had been feeding on Miracle.

Fleas are common in Ireland in the winter time, because centrally heated homes are warm enough to allow them to breed in carpets and soft furniture. Christina had treated Miracle for fleas a few months previously, but there must have still been flea eggs hidden in the carpets, and these must have hatched out and hopped onto Miracle. I couldn’t see any live fleas on her, but the signs of sensitive skin, twitching and rippling, are typical. She was feeling irritated as fleas in her coat were biting her. It’s common to find flea dirt without any live fleas, and the treatment is the same: the fleas need to be eradicated from the animal and from the home.

I treated Miracle with spot-on drops, and I gave Christina a special environmental spray to use in her house.