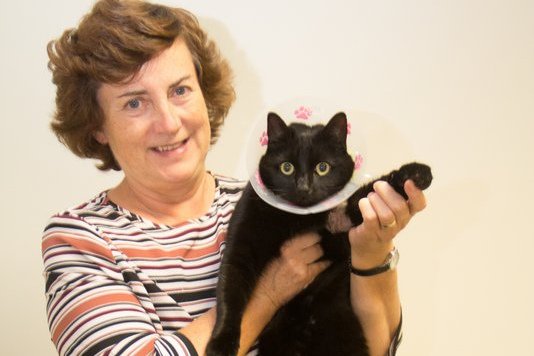 One evening, Monica noticed that Pashmina was behaving strangely. She was quieter than usual, staying in the corner, grooming herself continually. And when Monica watched carefully, she could see that the cat was repeatedly licking the inside of her left foreleg. Something was bothering her.
Monica picked her up to inspect her in detail. It was only when she actually lifted up the left foreleg and looked closely at the area around the cat’s armpit that she saw the problem: there was a 3cm long laceration in her skin. It was hidden by fur, as well as by the fact that it was high up, on the inside of her leg. The area was soaking wet, from Pashmina licking it, and it was obviously such a deep, wide cut that she had to go to the vet for treatment.

When I examined Pashmina, it was difficult to see the full extent of the wound clearly: she did not want to sit still. I had to admit her to my clinic so that she could be sedated, and even then, the wound was obscured by the dense fur around it. Once she was sleepy from sedation I had to use electric clippers to remove the fur for a couple of centimetres on either side of the laceration. I then had to clean the area thoroughly with a mild antiseptic solution. It was only then that I could carry out a detailed assessment of what had happened to her.

The wound looked as if it had been there for at least a day: it was easy for Monica to miss, as it was so well hidden on the inside of the leg. It was a straight-edged slice, as clean as if she had been incised with a scalpel blade. As a result, it was easy to fix: once I had cleaned the wound edges, I debrided the area, by scraping it gently with a gauze swab. This is always necessary for wounds that are more than a few hours old, to ensure that the wound edges are fresh enough to stick together after suturing.
In Pashmina’s case, I ended up using surgical staples to close the wound, rather than suture material. Staples are easier and quicker to use, they’re well tolerated by dogs and cats, and they are easy to remove after ten days with a special proprietary device.  I sent Pashmina home with a plastic cone collar, to make sure that she didn’t open up the wound by licking it and possibly removing the staples herself.
Her wound healed well, but there was one remaining worry: how had it happened in the first place? Monica spent some time looking around her home and garden, and with a bit of detective work, she found the cause.
Pashmina is a nervous cat who doesn’t like the other cats in the neighbourhood. She runs away from them if she sees them, often coming bombing through the cat flap with a big cat right behind her. The cat flap has a lock which is microchip-operated, so it lets Pashmina in while keeping other cats out.
There’s a lean-to shed at the bottom of Monica’s garden, with a perspex roof. She found that one piece of the perspex is broken, with a sharp-edged flap bent down. When Monica pushed her own hand into this hole, she couldn’t pull back her hand easily, because the sharp edge of perspex dug in to her skin. She had to carefully manipulate her hand out to avoid injuring herself. She thinks that Pashmina must have been on the back wall when another turned up. If she bolted across the roof, her paw could have slipped into the broken perspex area, and if she had pulled her paw out in a hurry, the sharp perspex would have cut her.
Cat bullies can cause big problems in the cat world: nervous cats are often chased and attacked by stronger, more confident animals. Luckily, injuries like Pashmina’s laceration are rare.
The perspex has now been repaired, and Pashmina’s leg has fully healed. With luck, there will be no further need for staples in this cat’s life.