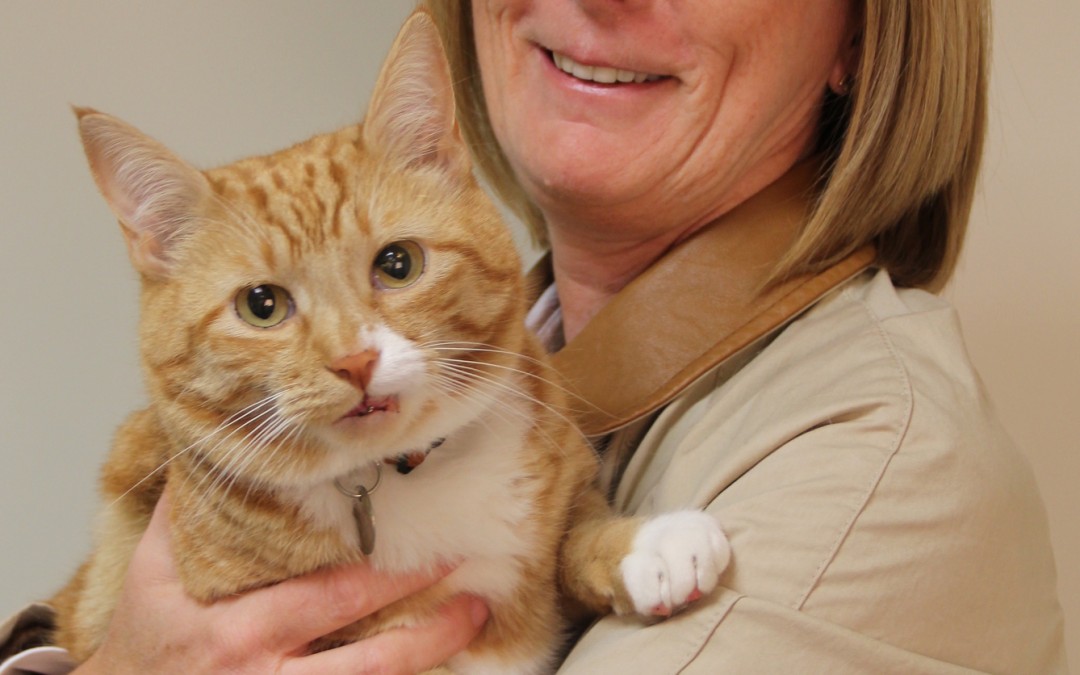 Squirt featured on the Nine O’Clock News when he was just a kitten after he had been saved from drowning. A man had fished out a bag containing three kittens from the Dodder Canal. Two of them were dead, but the man carried out life-saving emergency treatment on the remaining one. The kitten was named Squirt because when his chest was massaged during the rescue, water squirted out of his mouth.

Valerie was the lucky one from over a hundred people who offered him a home. She volunteers to raise funds for Cats Aid, the busy cat charity based in Dublin. For the past four years, Squirt has lived the contented life of a suburban Irish cat.

When Valerie saw Squirt last Sunday afternoon, she knew at once that there was something wrong . He was crouching outside her house, under a car, and when she called him, he refused to come up to her as he would normally do. When she went closer to have a good look, she noticed that his lower jaw looked wrong . He was holding it oddly, and it seemed swollen. Squirt was not his normal, friendly self: he was nervous and seemed disorientated. Valerie didn’t know what was wrong  – she thought perhaps he had been poisoned. She took him in to the Pet Emergency Hospital at once.

The emergency vet made the diagnosis: Squirt had a fractured lower jaw.  The left side of his lower jaw had separated from the right side, in the midline.  It was as if a blade had been placed vertically on his chin, and the bones behind the blade were split down the middle, leaving the lips, gums and other structures intact.This is a common injury in cats, and it always follows trauma. One of the most common causes is when a cat jumps or falls from a height: they land on their feet, but their head bashes into the ground, chin first. The injury can also happen when a cat is hit by a car, or by any other object (such as a golf club)  The precise cause of the injury is rarely known: cats like Squirt have adventurous lives, out and about, and anything is possible. A broken jaw is a serious injury: it stops a cat from being able to eat.

The emergency vet gave Squirt pain relief to make sure that he was comfortable and Valerie brought him into our clinic on Monday morning so that the fracture could be repaired.

Under general anaesthesia, I carried out a more detailed check of Squirt’s injuries, taking an x-ray to carry out a full assessment of the damaged area. He was lucky: there was just the single fracture, and I was able to repair it. I wrapped a loop of fine steel wire around the fracture line, tightly binding the left side of his jaw to the right side. This wire will be removed in a month, by when the fracture should be fully healed.

The short term challenge for Valerie is to get Squirt to eat again: good nutrition is a key part of recovery, but when the mouth or jaw is painful, it’s understandable that a cat loses interest in food. Pain relief is important, and initially, this can be given by injection, but oral medication needs to be given at home in the form of sweet-tasting drops.

It can be impossible to get treatment into some cats, but Valerie has an easy answer for Squirt. His favourite treat is a small tub of Ambrosia Creamed Rice, which is the perfect place to hide his small daily amount of medication.