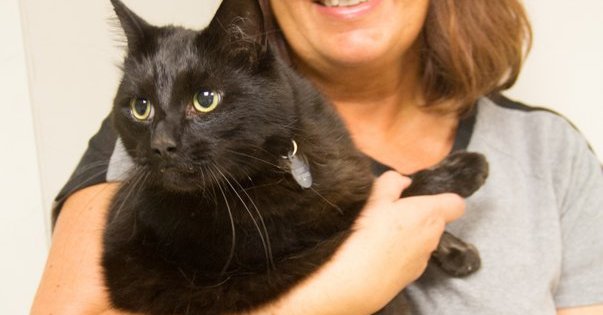 Toby often greets Miriam when she comes home from work. He’s there, on the doorstep, looking up at her, purring. She’s always pleased to see him, but one night last week, she did a double take when she saw him: he looked somehow different to normal. She looked carefully at him, and that’s when she saw traces of white paint on his feet.
She picked him up to inspect him more closely, and she discovered that not only did he have paint on all four feet, but he also had streaks of white paint on his underside. He must have walked over a freshly painted horizontal surface, such as a wall or a table. The paint was still wet, and when Toby miaowed at Miriam, she could see traces of white on his tongue. It was obvious that he didn’t like having the paint on his fur, and he was trying to remove it by grooming himself. Miriam worried that he might end up poisoning himself by swallowing something toxic, so she called my clinic at once.

It’s common for cats to become contaminated with chemicals like this: they live independent lives, going out and about to areas that their owners don’t know about. The problem is that if they do come into contact with something toxic, they often get a double dose of poison.
First, many substances cause direct irritation of the skin, as well as the poison being absorbed into the blood stream through the skin surface.
Second,, due to the self-cleaning instinct of cats, they often try to remove anything that gets stuck to their fur. This means that they end up swallowing large quantities of whatever it is, and this can then be absorbed from their digestive tract into their blood stream.
For these reasons, it has to be taken seriously whenever a cat gets anything odd on their fur.
One of the challenges is that it can be difficult to establish the potential toxicity of an unknown substance. In the past, some types of paint contained high levels of lead which could cause life threatening problems, including blindness and seizures. However for over twenty years now, lead has been banned from inclusion in paint on sale to the general public. It may still be in some specialist paints, but it’s rare.
So if Toby had stood on some simple emulsion type paint, the risk of a problem was low. He might still suffer from gastro-intestinal upset due to irritation of his digestive tract but he was very unlikely to be seriously poisoned. However there was still a problem: we had no idea what the substance was. It looked like regular paint, but what if it was something that did contain something toxic?

To be safe, we decided to take some simple steps to help Toby. I gave him a mild sedative, and we used electric clippers to remove the contaminated fur on his underside. We also used washing-up liquid to remove the wet paint from the undersides of his paws, where he had stood on the painted surfaces. He was paint-free and clean when Miriam collected him a couple of hours later.
Owners should never try to remove paint from cats using strong chemicals like paint thinners or strippers: these can be toxic themselves to cats, and people can end up harming their pets in their efforts to help them.
The best answer is to keep cats away  when painting. Miriam sends her pets to a boarding cattery if she is decorating her home. It can be difficult to keep neighbours’ cats away, but at the least, it’s worth putting up simple barriers to stop them coming close.