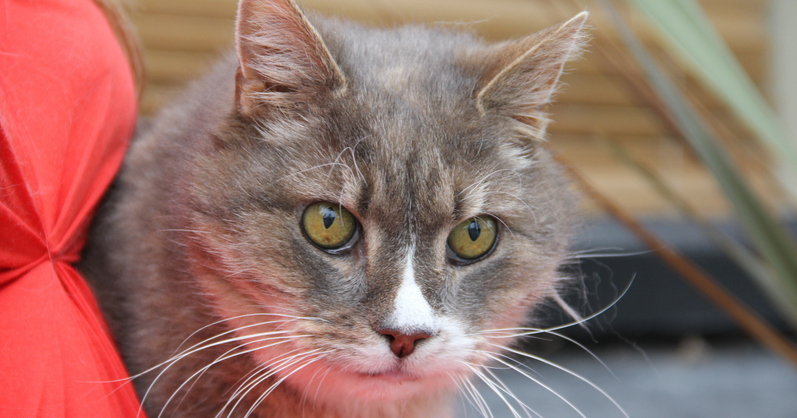 Maura took on Tom as an adult rescue cat when she was living in Cabinteely fifteen years ago. He became a much-loved pet, and had been with the family ever since, including a three-year stretch living in France. Tom had settled comfortably with Maura and her family in Enniskerry for his retirement. As an elderly cat, he didn’t do any more than strolling around the front of the house, then back inside to his favourite sleeping place. He ate well, but had begun to lose weight, and Maura suspected that he might be nearing the end of his days.

Just after Christmas one year, on Wednesday 28th December, Tom went missing. Maura and her family searched in all his usual haunts, but there was no sign of him. He had vanished. Maura was told that cats sometimes wander away to die, and she presumed that this is what Tom had decided to do. Her family quietly grieved for their pet, and time moved on.

Meanwhile, on Thursday 29th December, a kindly lady from Enniskerry had arrived at our vet clinic holding the motionless body of a cat in her arms. She had found the animal outside, lying on his side. He could barely lift his head. She had never seen the cat before, but she knew at once that he needed help. When I examined him, I could see that he had three immediate problems: starvation, hypothermia and some other, as yet undiagnosed, underlying disease. The only way that the cat could be properly helped would be by carrying out a complex work up including blood tests. But this seemed to be an ownerless stray cat, so who would pay for this type of work-up? Such investigations can be expensive, and often, the outlook is hopeless for such an unwell cat in any case. Sometimes it’s kinder just to carry out euthanasia rather than putting the animal through complicated procedures.

When I scanned the cat, I found a microchip, but disappointingly, the chip number was not registered on any database. We knew now that the cat was not just a stray: he was somebody’s pet, and it was just a case of finding them.

We tried all sorts of publicity: we posted his details on Facebook, Twitter, local newspapers and via notices in local shops. Nobody came forward for him, but we did receive plenty of general support. Sympathetic people on Facebook even made donations so that we were able to give him the best possible treatment and he made a full recovery.

One of our kindly vet nurses offered to look after him. As weeks and months passed, we gradually lost hope of ever finding his original owner.

Then one week, a friend of Maura’s son saw a poster in the local post office, with a photo of Tom. He told Maura and the connection was made. It turned out that he had been microchipped over a decade ago and his details had not been maintained on a current database.

For some reason, Tom must have wandered much further away from home than normal. He’d managed to clamber over a high wall, and he’d found himself in an area that nobody had imagined he could reach.
Tom has now been reunited with Maura and her family. He won’t be allowed outside any more: he’s going to spend the rest of his days indoors. One attempt to wander off and die is more than enough.

If any pet owner is unsure whether their pet’s details are recorded correctly on a database, please ask your local vet, or send a query by email to registrations@fido.ie.